Based on yesterday's blog post, I decided to dig deeper into the Millennial (those born between 1981 and 1997) and the newest generation, Generation Z (those born in and after 1998), registered voter in North Carolina to see:

First, some broad national understanding of the Millennials and Generation Z: the Pew Research Center has an excellent series on research and analysis of these two generations. As someone who has watched these trends for some time, I believe these generations will have a tectonic shift on the country's (and thus the Old North State's) political environment and dynamics.

The following national data comes from the 2016 American National Election Study (ANES), which you can find the data and do your own number crunching via this webpage.

First, to give some context to the NC registration figures that I'll present below, I looked at the electorate breakdowns by generations within the 2016 ANES Data. For purposes of defining the generations (see above for Millennials and Generation Z, which I am combining for the remainder of the analysis, unless noted), Generation X cohort are those born between 1966 and 1980, Baby Boomers are those born between 1945 and 1965, and the Greatest/Silent generations were born before 1945.

First, here are the 2016 presidential vote choices by each generation, with the percentage of the generation within the general electorate identified: 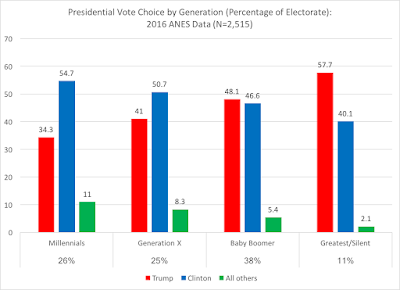 As has been found by Pew and others, Millennials trend more Democratic in their voting patterns, and we see this in the fact that nearly 55 percent of this generation cast their vote for Hillary Clinton, while at the other end of the generation spectrum, those of the Greatest/Silent generation were a mirror image for Donald Trump (nearly 58 percent casting their vote for the Republican presidential candidate). Another interesting facet of Millennial presidential voting: they recorded the highest generational support for third party candidates (11 percent).

Conversely, while Generation X were more Democratic in their vote choice, Baby Boomers (the plurality of the electorate at 38 percent) went slightly more Republican than Democratic.

Within the 2016 ANES data, respondents were asked about their self-identification with the major parties, or their "independence" from either the Democratic or Republican parties. 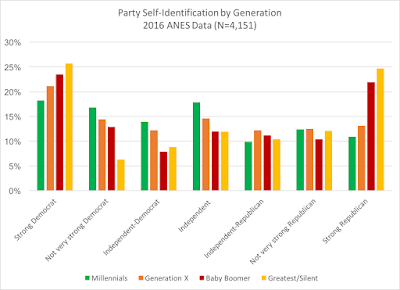 But in looking at the strength of partisanship within national Millennials, "strong Democrats" are 18 percent of that generation to only 11 percent self-identifying as "strong Republicans."

This strength (or lack thereof) of partisanship in voting for presidential candidates has been much studied and analyzed, and the core finding is that even if a voter identifies as an "independent" but leans to one party or the other, the likelihood is that partisan loyalty to that party's presidential candidate can be as strong as those who identify with the party. The 2016 ANES data bears this out once again: 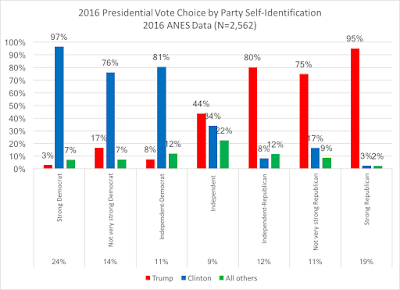 Not surprising, 2016's "strong partisans" voted 95 to 97 percent for their party's presidential candidates, while "not very strong partisans" voted three-quarters of the time for their party's presidential candidates. But in looking at the independent 'leaners', their partisan loyalty to the party they leaned to was 80 percent. Only "true" independents split their vote, and a significant number (the most within the party self-identification groups) went for a third-party candidate.

In breaking out national Millennial voters in the national study, one can use this party self-identification and see how presidential vote choices went to find comparable trends to the over national electorate: 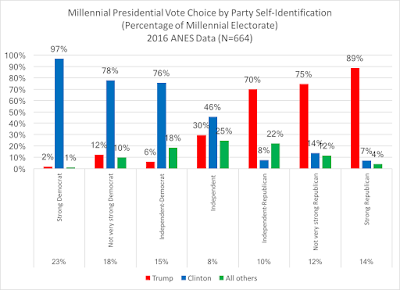 So, this national context sets up the following analysis on North Carolina's voter registration pool with a focus on Millennials. The following data comes from the North Carolina's active and inactive voter registration information provided by the NC State Board of Elections, in which I took the 6.8 million active and inactive voters and recoded each voter into generational cohorts and various demographic characteristics (gender, race, and party registration). As noted previously, Millennials and Generation Z registered voters are now 30 percent of the NC voter pool, while Baby Boomers are 32 percent of the pool, as we enter 2018 in North Carolina. 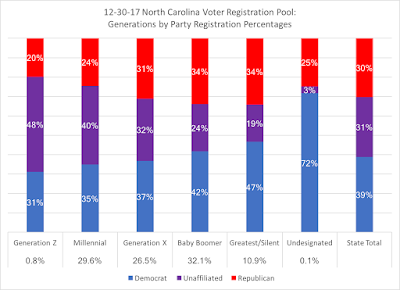 First, to give some context as to the importance of younger voters (i.e., Millennials and the entering Generation Z cohorts), over the past two years of registrations, Millennials have made up over half of the new voters coming into the pool (based on data from 12-30-17): 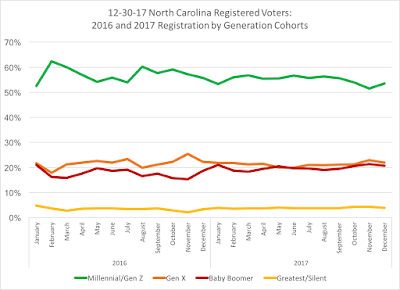 Based on the 12-30-17 data, well over half of the voters registered in the past two years are Millennials or Generation Z; in looking at these generation cohorts, the party registration has shown a considerable uptick in "unaffiliated" status since the generations have been eligible to register and vote (starting in 1999): 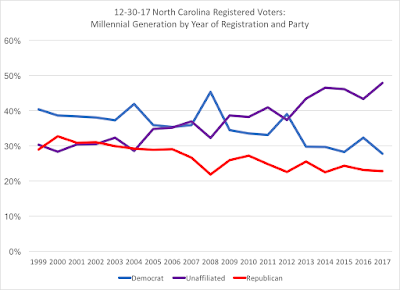 While this trend in unaffiliated status is notable, I would hypothesize that perhaps this is because of the two parties' public perceptions, rather than a distancing of Millennials from their party loyalty. Perhaps Millennials are choosing to go "independent"/unaffiliated because of the public perceptions of the parties (polarized, divided, more ideologically coherent but unwilling to compromise), but that when it comes to party voting, from at least the national trends, Millennials are more Democratic in nature and allegiance in their vote choices, at least at the presidential level (see above chart). Also, I would point to the 2016 electorate that favored Democratic identification over Republican identification, with only 8 percent of Millennials identifying as "pure" independents.

In crunching the numbers of these registered Millennial voters in NC, I broke them out into three distinct categories: regionalism (or whether a voter resides in an urban, suburban, or rural county of the state, as categorized by the Office of Management & Budget in 2015); race (white, black/African-American, and all other races), and gender.

First, regionalism in the state has become another tectonic shift in the Tar Heel state's politics, with traditionally more than half of the votes coming from only 13 out of 100 counties in NC. In breaking out registered millennial voters into the three county classifications, 61 percent of them reside in urban counties, with 21 percent in rural counties and 19 percent in suburban counties. 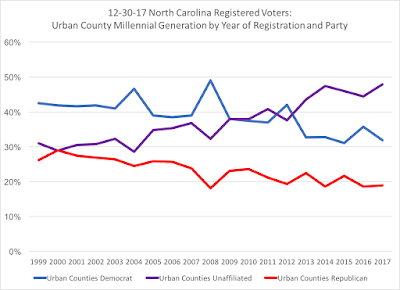 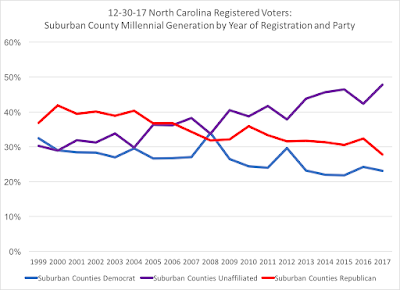 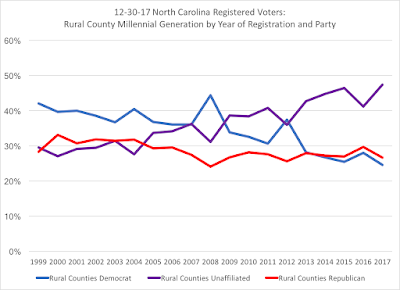 In analyzing based on racial composition, again noticeable trends are prevalent among white, black/African-Americans, and all other racial groups in the Millennial cohort. 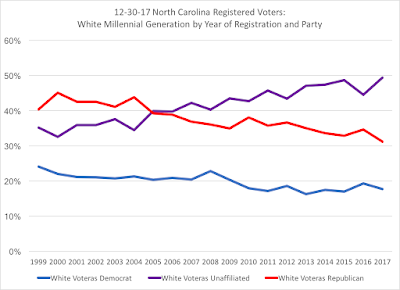 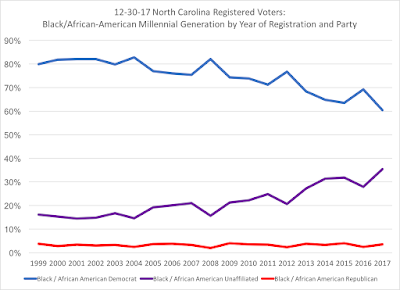 And among all other racial groups (Asian, native Indian, "other", multi-racial, and unknown): 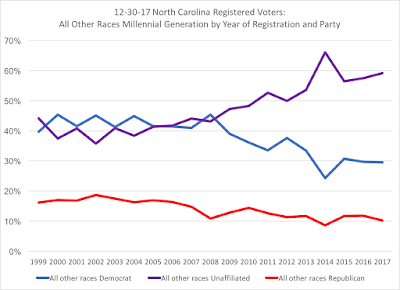 While the research in political science has shown that white Southerners are much more Republican in their affiliation, white Millennial North Carolinians have been shunning the GOP registration since 2004, and going much more unaffiliated than necessarily registering Democratic. In 2017, nearly half (49 percent) of white Millennials registered "unaffiliated."

While this would be surprising to some, I think the more interesting trend line is among black/African-American Millennial NC voters: while presidential election years help to prop up Democratic registration within this cohort, the trend line of unaffiliated registration has been steadily growing since 2008. Perhaps this is the "post-civil rights era" generation that may still vote heavily for Democratic presidential and other candidates, but their party registration is breaking away from that Democratic dominance.

As noted in the previous blog post, NC Millennial voters are the most racial diversified cohort of any in the voter pool: 61 percent of NC registered Millennial voters classify themselves as white, 25 percent are black/African-American, and 13 percent "all others" racial groups.

Finally, much has been about the gender gap and the role of women and men in politics this past year, with what seems to be a cultural awakening about gender and related issues. In breaking 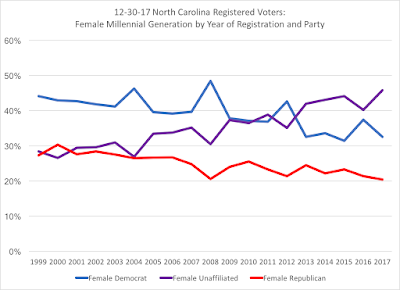 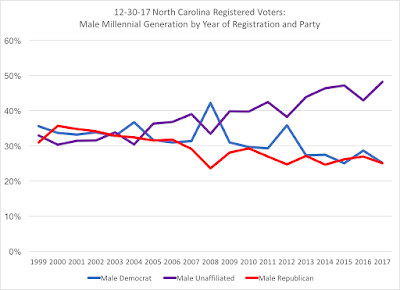 So, to sum up some thoughts on the impact of Millennial and Generation Z politics on North Carolina, as expressed through voter registration trends of these two cohorts since the beginning of the new century:

Thanks for taking the time to read a "deep dive" post on this topic.
By OldNorthStatePolitics.com - January 02, 2018